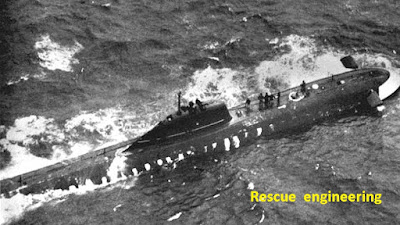 The submarine, which was on alert in the Mediterranean Sea, was sent to the North Atlantic to participate in the Ocean-70 exercise, the largest in the history of the Soviet Navy, in which the forces of all the fleets of the USSR took part.

On the evening of April 8, 1970, when the submarine was north of the Azores, when the K-8 ascended from a depth of 160 meters under the periscope for a radio communication session, a fire broke out in the sonar control room located in the central post (CP) of the nuclear submarine.

Within a minute, on an alarm signal, the entire command of the boat arrived at the central control center, the commander began to lead the fight for the survivability of the ship. At the same time, a report was received about a fire in the 7th compartment, where the regeneration was burning. After another five minutes, the boat surfaced. Further, the fire began to spread through the air ducts.

After an emergency ascent, most of the crew was evacuated to the approaching Bulgarian freighter Avior (later renamed to Hadji Dimitar) [3], from which the radiogram left, first to the Bulgarian Maritime Shipping Company in Varna, and from there to the headquarters of the USSR Navy ( the submarine's own radio equipment was disabled as a result of the fire).

A combat shift of 22 people remained on board, headed by the captain of the second rank VB Bessonov, who, in the conditions of an 8-point storm, continued to fight for survivability. The crew members evacuated to the Avior were transferred to the three Soviet ships that approached (which also tried to take the K-8 in tow). However, the ship sagged more and more at the stern and, having lost longitudinal stability, sank within a short time, taking with it a full combat shift (several people managed to jump overboard (including the captain), but they could not be saved).

Based on materials from Wikipedia

...everal people managed to jump overboard (including the captain), but they could not be saved -

some publications indicate that some of the sailors were unable to move from the damaged submarine due to a severe storm.

Probably due to the cold ocean water and storm, they could not hold out on the surface for more than 2-3 hours. Due to the fire, they could be without special wetsuits.

To increase the chances of rescuing seafarers in such conditions, compact rescue systems are needed that can be used to increase the effectiveness of wetsuits or replace them in the most severe accidents. Perhaps such compact systems can be stored in the wheelhouse, outside the sturdy hull of the boat.

However, over the past 20 years, there have been no publications on new ideas, developments and methods for increasing the survival rate of mortals and pilots in cold water. Give your aces more chances - after all, this is partly the difference between a high-tech army from all the others.

A lot of efforts are directed to training crews, duplicating systems and increasing the reliability of units. But this is only part of what is possible.

Popular posts from this blog

October 08, 2020
Teoretical engineering Development of technical solutions and methods for a variety of tasks. For example, increasing the resolution of photography from space. Special software processing, an unusual shape and a special arrangement of the pixels of the photomatrix significantly exceed the technical parameters specified by the manufacturer. Teoretical engineering
Read more

December 08, 2020
Teoretical engineering In April 1950, Western media reported that the Russians shot down a plane over the Baltic Sea. Source - https://aeroplan2010.mirtesen.ru/blog/43351005830/Baltiyskiy-intsident---pervyiy-vozdushnyiy-boy-%C2%ABholodnoy-voynyi%C2%BB US Position: On April 8, you shot down a US naval aircraft, not a B-29, but a Privateer (PB4Y2 Privateer is a large four-engined aircraft designed for naval reconnaissance and patrolling). What happened then is described in a number of sources. We will rely on the article of the now deceased D.I. n. A. Orlova "US aerial reconnaissance over the territory of the USSR in 1950-55." - this is not popular literature, but a publication in the authoritative scientific journal "New and Contemporary History" (No. 6, 2000). The author drew on materials published in the Russian press and his own archival finds. One of the main documents is a report to the unit commander, Colonel F. Shinkarenko, flight commander Senior Lieutenant D
Read more

January 03, 2021
Rescue engineering   Source https://topwar.ru/172186-istrebitel-f-15-vvs-ssha-upal-v-severnoe-more-poiski-pilota-prodolzhajutsja.html   US Air Force F-15 fighter crashed into the North Sea, search for pilot continues   The United States Air Force F-15 took off from Lakenheath Air Force Base, which is used by both the Royal British Air Force and the United States Air Force. This air base is located in the English county of Suffolk The pilot judge has not been announced at this time. As there is no data on the probable causes of the plane crash into the sea. According to the latest information, the military aircraft stopped communicating about a hundred kilometers from the coast of Yorkshire. Coast Guard helicopters and several ships were sent to the alleged crash site.   Rescue engineering   When flying over the sea, pilots wear special wetsuits. This wetsuit provides buoyancy and protects from the cold for several hours. But there may be bad weather, night or fighting, when this t
Read more